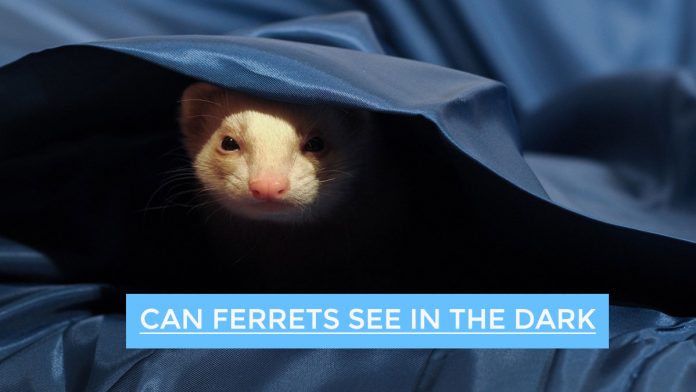 Most people keep ferrets as pets nowadays. The ferret is related to the European polecat. It is a mammal that belongs to the family Mustelidae. They were used for hunting in the past but now they are used as pets. Many people have the “can ferrets see in the dark” question. We discussed it deeply today.

The short answer to can ferrets see in the dark

This is an interesting topic. Ferrets don’t have good eyesight. They have quite poor eyesight. Evan humans see better than them. Ferrets vision is more like the binocular vision which is what humans, eagles, wolves, and snakes have. Both eyes are positioned on the front of their heads instead of sides. So they don’t have a wide view. They should turn their heads like us to see things on the sides.

Ferrets had to suffer from some things because of their eyesight. They can not make out things in the distance very well. That’s called nearsightedness. They also suffer from a blind-spot under their nose so they have to rely on smelling whatever may be positioned here. If you are a ferret owner you may experience this. Sometimes they fall in while climbing and damage your furniture or other appliances.

It is hard to find the vision of an animal but according to researchers ferrets can only see red color. Anything else they see is the shade of grey. That is not a problem. Many animals are there who can only see one color. Dogs, cats, mice, rats, and rabbits are in this group. Some animals see more colors than humans such as mantis shrimp and bees.

However, ferrets’ eyes are not that bad. There are some advantages. They can see in great detail. They can identify very little things when the object is near their eyes. Also, they can see other ferrets very well and can interact with them using body language patterns.

How can an animal see in the dark

See in the dark cannot be done like normal vision. Different animals use different techniques to do that. Some special features can be seen in most of them

This vision is not like in the light. They only recognize the edges of the shapes and movements. But some animals have special abilities like thermal vision. Animals like bats use ultrasonic sound waves to recognize objects in front of them instead of using eyes. But that is also a kind of vision.

Ferrets can see things well at dawn And dusk

Get back to the ferrets. I told you above that ferrets can see well in low-light conditions. Twilight hours at dawn or dusk are low-light conditions. They can see very well until completely dark. Also, they cannot adapt easily to bright light or quick brightness changes. If you are a ferret owner, please be concerned about it.

Their ability to see in low-light conditions came from their ancestors. They used to hunt during these hours. You may have to see ferrets’ eyes glow in the dark. This is unique to a species.

So how they can see in low-light conditions. Well, there are several reasons. The first one is slit pupils that are horizontally placed in their eyes. These pupils improve their surfaces/edges detecting and their ability to see more in low-light conditions. Ferrets have an especial eye structure. It is known as tapetum lucidum. A reflective film is located at the back of a ferret’s eye. It helps the ferrets to concentrate the smallest amount of light to improve vision.

You know ferrets have different eye sites that are not very useful most times of the day. So their other senses adapted to their survival. Here we talk about their hearing and smell.

Ferrets are famous for their great hearing abilities. The lower hearing limit is at 60 dB. Estimated the average audiogram is 36 Hz. and the upper hearing limit is 44 kHz. The lowest thresholds were found in the region of 8–12 kHz. Ferrets can calculate the distance to a sound source. They can understand the environment around them by their numerous hearing receptors.

A message to ferret owners

Ferrets have a great sense of smell and hearing all day and better eyesight in the dawn and dusk. If you are a ferret owner you should be careful about your pet. As I said, ferrets can’t adapt to brightness changes quickly, so please keep them in suitable light conditions. They have super hearing abilities but because of that loud and noisy sounds are harmful to them. Don’t keep them in that type of environment and don’t play loud music near them.

We have answered your great question now. We didn’t stop there, we told you amazing facts about ferrets’ senses.

The summary of this article is like this. Ferrets can’t see in the dark but they can see very well in low-light conditions so they are crepuscular. They have the greatest senses because of that. Ferrets owners should keep them safe from harmful lights and sounds.

This is only one question. We have so many articles answering so many questions about animals. Check them too.

Bryan Davis - May 15, 2019 47
Once you become a new mother, there are so many considerable factors to think about your child. Actually, he or she is your elder...

All Bizzare Truths About GTA 6 Release by RockStars

Shell Shockers – Let’s Start to Explore The Game of The...

Bryan Davis - April 12, 2021 0
Here we going to answer dog questions again. We are not getting bored no matter how many questions to answer. This one is a...

They take the throne illegally or by force – Codycross Answers

Time for Some Self Pampering Crossword Clue – Codycross Answers

They take the throne illegally or by force – Codycross Answers

All Bizzare Truths About GTA 6 Release by RockStars

ABOUT US
This is a lifestyle blog offering an everything about Health & Fitness,Financial Services,Insurance,Travelling and more.Join us. Dive in. Improve your Life
Contact us: anythingefind@gmail.com
FOLLOW US
© 2018-2021 E Find Anything
MORE STORIES